Small Business of the Day! 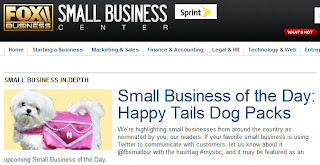 Big news! We were selected as Small Business of the Day for Thursday, Nov. 10, by the Fox Small Business Center! Check it out (Thursday only) at http://smallbusiness.foxbusiness.com/

Here's what they wrote about us (http://smallbusiness.foxbusiness.com/entrepreneurs/2011/11/10/small-business-day-happy-tails-dog-packs/):


We’re highlighting small businesses from around the country as nominated by you, our readers. If your favorite small business is using Twitter to communicate with customers, let us know about it @fbsmallbiz with the hashtag #mysbc, and it may be featured as an upcoming Small Business of the Day.
Small Business of the Day: Happy Tails Dog Packs
Who: Janet Vigallon, 47,@htdogpacks

What: Backpacks for dogs to wear when walking

How: Vigallon was inspired to make her own pack for her family's rescue dog to wear when going for walks. She wanted a pack that allowed her dog Daisy to carry water vertically and still have for other toys and bags.

"I didn't like what I saw online or in stores," she said.

So, she took some fabric and created her own dog pack. After receiving compliments from people in the community, Vigallon, who also works as a physical therapist, decided to try her hand at selling them locally and online.

In her own words: "I had her wearing it every day on her walk and got so many comments from the community and friends requesting I make them some. After using it regularly for a year, we decided to go for it."
Posted by Happy Tails Dog Packs at 12:44 PM No comments:
Email ThisBlogThis!Share to TwitterShare to FacebookShare to Pinterest
Newer Posts Older Posts Home
Subscribe to: Posts (Atom) 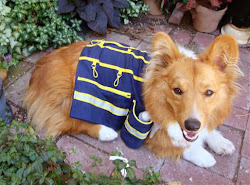